Dahl to Join Other Franchisors at 2014 IFA Convention 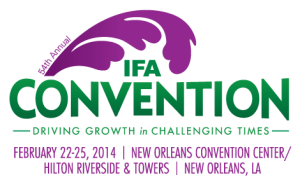 NexGoal president and CEO Kevin Dahl will head to New Orleans, LA for the 2014 IFA Convention. Sponsored by the International Franchising Association, the five-day event will feature educational sessions, networking events, in-depth panels, and a panel of top notch speakers.

“As a charter member of PAFI, I’m looking forward to sharing my experience as a franchisor with fellow athletes,” said Dahl. “The IFA Convention always has something new for those of us in the industry. The educational and networking aspect of these five days will generate momentum for NexGoal as we continue to grow.”

The Emerging Franchisor Conference (EFC) – presented by the International Franchise Association – wrapped up this week in Ft. Lauderdale, FL. NexGoal’s Kevin Dahl was in attendance with fellow franchise operations executives.

According to the IFA, “this is a prime networking and educational conference for franchisors that are ready to take their system to the next level.” Franchise leaders had the opportunity to share tips and strategies in both franchise and business development.

“This event featured some great speakers and valuable information,” commented Dahl. “It was a great chance to talk to fellow franchisors and pick their brains about what has worked for them and to learn about different strategies.”

NexGoal’s Kevin Dahl and Brad Mullins returned from the 53rd International Franchising Association’s annual conference in Las Vegas, NV with some new connections and more information as they continue their entrepreneurial efforts.

“The IFA was a fantastic resource of information and experiences that Kevin and I can use in building the NexGoal International franchise operation,” said Mullins. “Kevin sat on a panel of former professional athletes and did a great job of explaining our franchise opportunity to the audience.  All the attendees were very friendly and willing to share their experiences with us on starting their franchise business.  Kevin and I both left the show with some great new insight to the franchise business, new ideas and new friends.”

“The IFA convention was an informative, well-run event,” added Dahl. “We attended several sessions relating to growing NexGoal, including a new franchisor orientation. The roundtable sessions on franchise brokers, marketing franchises, and the use of Discovery Days were timely as we work towards expanding NexGoal in the near future.”

Dahl will join the New Markets Summit panel, “Striking the Right Balance: Celebrities, Athletes, Diversity, and Franchising.” The panel will discuss topics such as deciding if a celebrity franchise is a challenge, opportunity, or both; learning how franchise systems have used celebrities to build their brand identity; why a “celebrity” is associated with franchising; understanding how being a Franchise Champion of Diversity impacts your team, staff, customers, and community; and recognize how diversity and inclusion can accelerate the mission of franchising.

The panel will be moderated by Joe Bourdow, CFE and Senior Advisor with ValPak and the chair of the Diversity Institute Board. In addition to Dahl, the panel will feature Jerry Crawford (Jani King International), Byron Stephens (Marco’s Pizza), Glen Mah (First Picks Management), and Tara Amaral (ADP Inc.).

“I am very excited to be able to participate on the IFA Athlete and Celebrity panel,” said Dahl. “I look forward to explaining how NexGoal and our niche concept came to life, and why athletes are a huge part of our franchise concept.”

The IFA Annual Convention features an exhibition as well as four days of panel discussions, roundtables, and networking events, focusing on topics such as finance, franchise sales, domestic and international growth, legal, marketing and PR, and operations.

“I looking forward to attending the IFA show in Las Vegas with Kevin,” added Mullins. “This gives us an opportunity to have conversations with business owners in the franchise world as well as learn more about operating a successful franchise.  We are equally excited about marketing the NexGoal franchise model and receiving candid feedback from our peers in the industry.”

NexGoal will be participating in the Franchise Expo South, January 11-13, 2013, at the Miami Beach Convention Center. Sponsored by the International Franchise Association, this will show provides the opportunity to meet face-to-face with industry-leading franchisors and attend several educational seminars and conferences.

According to the show organizer, Franchise Expo South is designed specifically to enable prospective franchisees determine which types of businesses match their needs.  In addition to basic how-to sessions and advanced in-depth presentations, there will be information for current franchisors to assist in their development, and the latest in legal, strategic, and financial issues.

“Attending shows like Franchise Expo South is just another way we can stimulate growth and development at NexGoal,” said Kevin Dahl.  “This also offers an opportunity to network with other franchise owners and industry leaders.”