Resume 101: Make These Mistakes and You Have No Shot

As a job seeker in the internet age, you have one chance to make a good first impression—and it likely will be weeks before you meet a hiring manager in person. With companies fully encompassed in accepting applications and resumes through their websites and via email, job seekers can be eliminated for jobs before having an opportunity to speak with a hiring manager in person or on the phone.

What does this mean for you as a job seeker? It means if you make a mistake on your resume, you are out before you have a chance to even talk about why you want to work at a company or why your experience makes you the best candidate for the job.

This week, we examine some of the top resume mistakes employers hate thanks to a survey from our friends over at CareerBuilder. We have also reached out to some recruiters in the industry to provide some feedback on these mistakes, and what you can do to avoid them as well.

Lying on Your Resume is a Bad Thing

For some reason, job seekers have gotten to the point where they think employers will not perform a background check. In the CareerBuilder survey, they were provided with a response that an applicant said he/she worked at a federal prison. When the employer performed the background check, they found out that applicant was actually in prison.

Technically they were not “lying,” since most prisoners do perform a job function while in prison. However, saying you work at a federal prison and actually working while in prison are two completely different things.

When we reached out to a recruiter about this matter (after they stopped laughing about the prison story), they had some choice words for job seekers.

“Sure, there may be a few companies out there who do not fact check every aspect of your resume…but why bother lying when the majority of them will? If you are lying about an experience you did not actually have in your work history and a company does not find it before you start, it is going to stand out once you get the job because you likely do not actually have that skill.”

Working in the digital world, I can vouch for what this recruiter is saying. So many people say they are proficient in things like SEO, email marketing and social media—but their experience is using a plug-in to handle SEO, sending an email to someone and composing a tweet. These people are weeded out very quickly at a new job when a website’s search ranking falls, their email marketing campaigns are not sent and they only send one or two social posts a day instead of having a complete social outreach plan. 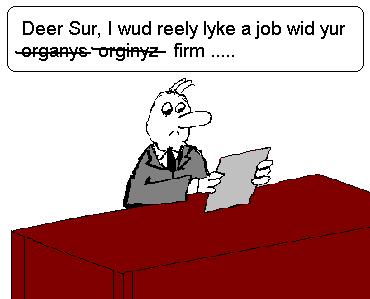 This comic is funny, but you would not believe how many resumes have misspellings like this on them.

“One applicant said he/she had great attention to detail, but ‘attention’ was misspelled.”

That example was again from the great people at CareerBuilder and sadly is a real thing that happens with job seekers these days. I mean, think about that for a second—in a day and age where a red line appears under words that are misspelled thanks to this thing called spell check, someone still misspelled the word attention on their resume.

How can this be avoided? Well for starters, when you see a red line on your resume or cover letter, you should probably right click it to see what the issue is.

Secondly, one recruiter had this easy suggestion. “Ask a friend to read over your resume and cover letter before you hit submit. Seriously, even if your friend is not in the room with you they are likely one email away.”

Yeah, there really is not much more to say in this section. If you misspell something on your resume or cover letter, you are probably not getting the job. Also, bad grammar is something else to avoid. You should always have someone read your resume and cover letter before you hit submit.

For this one, CareerBuilder actually reached out to those in the Twitter verse to ask what their biggest resume pet peeves were. Marvel Consultants responded, “Improperly and poorly formatted resumes with no contact info and sloppy/shady/shifty work history & weird listed hobbies.”

Okay first off, huh? If you are applying for a job and do not have at least three forms of contact information (phone, email and address) for a job on there, what are you doing? Your goal is to get a job if you are submitting a resume, so why would you not have contact information on there for someone to reach out to you for an interview?

Second, I want to know what constitutes as “weird listed hobbies.” I am not usually one to put hobbies on my resume to begin with, but what kind of things are people listing out there to get classified in the weird section to the point where consultants are actually turned off by their hobbies. On second thought, maybe I do not want to know.

Okay, I did want to know more about this—so I again reached out to another recruiter.

“You would not believe how many resumes I get that have bad phone numbers or email addresses on them. I always tell the candidates I am working with to verify their contact information before I submit them to a client.”

“Weird hobbies on the resume? Oh man, someone said they were proud of their gun collection on a resume once. Not that I have anything against guns, but I did not want the potential employer thinking they were going to be a future problem if something did not go their way—so I had them remove it.”

There are so many templates out there for cover letters and resumes that it is almost inexcusable to not have something that is easy to read and provides all the information an employer would need before meeting you for an interview. If you are not getting called back for jobs you are applying to, maybe you need to go back to square one with your resume.