Pokémon NO: Playing Pokémon GO at Work Will Get You Fired

Technology, oh sweet technology. As our society continues to grow and develop through the world of technology, games many grew up and loved as kids are coming back in a major way.

Unless you have been living under a rock for the last week or so, the latest game to make its comeback in the technological world is Pokémon. Yes, those cards you traded and battled with in middle school have come to life (literally) in the form of an app called “Pokémon GO.”

Let me be honest for a second. I have never been on “Team Pokémon.” I could not tell you the difference between Pikachu and Bulbasaur without Googling it first. But what I will say, is that while I am slightly annoyed by all of the Pokémon social media posts, the idea behind the app is fantastic.

Getting people out of the house and active to chase and “collect” in teams is a brilliant idea when the majority of gaming is done on the couch in front of a television. As long as people are not stopping their cars in traffic (really people?), trampling through graveyards and cemeteries or falling off cliffs (yup, that happened too) I am all for you collecting Pokémon to promote activity.

However, where you should absolutely not being chasing down your favorite characters from the game is at work—yet it appears some seem to think this is a good idea. Newsflash workforce, if you play Pokémon at work, you will likely get reprimanded or fired.

You would think this is common sense, yet it appears employers are already going out of their way to make sure their employees are not playing the viral game while on the clock (more on that later).

In an article on Time.com, they collected a few tweets from people participating in the game. One person—on social media nonetheless—openly proclaimed for the whole Twitterverse to see:

20 mins late for work but my I did catch a pidgey, rattata and a caterpie #PokemonGO

Seriously people? It isn’t enough that you were actually late for your job because of a game, but you broadcasted it on social media (just a friendly reminder, ANYONE can see what you are tweeting) for your boss to see the real reason you were late.

These people are not the only ones experiencing issues in the workplace. Boeing recently blacklisted the app. They released the following statement to their employees according to BGR.com.

“Due to the popularity of Pokémon GO and users not being able to make the conscious decision to not play Pokémon at work – we had a near miss for a user getting hurt while playing the game. Due to that, we had to react and disable the Pokémon app from all devices – we had over 100 active installs of that application. The blacklist removes all that we consider to be carrier bloatware and now also the Pokémon GO app.”

Okay, now we have people nearly getting hurt on top of not doing their jobs and being late to work. If you are one of these people, you should re-evaluate your work priorities right now. 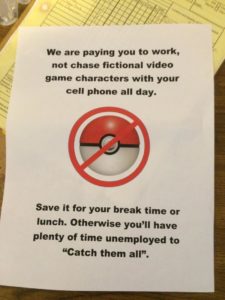 But just in case you need another friendly reminder, please read the above flyer again. However, if you do (or did) end up losing your job due to Pokémon GO, we do have a number of open jobs for our clients—as long as your promise not to play it on the clock at your new job. You can click the blue link below! And for the love of all that is good, just say NO to Pokémon GO while on the clock!