NFL Combine: 5 Crazy Interview Questions You Need to Prepare For

For casual fans, the NFL Scouting Combine is a place where players are measured, timed and taken up and down draft boards based on what is essentially the equivalent of less than a day of practice. However for the athletes, what goes on behind the scenes is much more important—as in the matter of a few short days, many of these athletes will go through upwards of 15 job interviews. 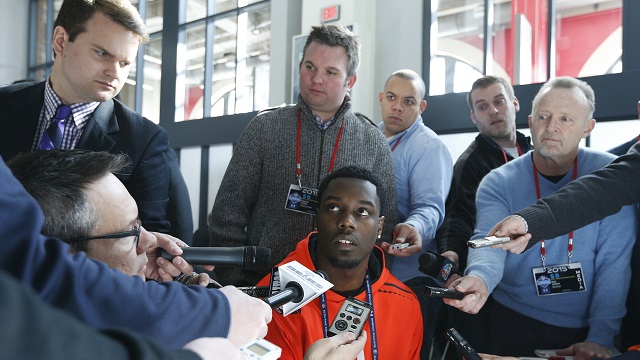 Players are asked some pretty crazy questions at the combine. Photo Credit: NFL.com

Just like you, many of these athletes take the time to prepare for any question that will be sent their way during an interview. But as we all know, you cannot always be prepared for every single question—as some interviewers make it their job to try and make the potential candidate as uncomfortable as possible during their meeting.

Whatever their reason—seeing how the person works under pressure or trying to get them to think outside of the box—some interview questions just make you wonder where they came from. As New England Patriots safety Devin McCourty put it, “It’s all about how you react.”

Thanks to reports out of the NFL Scouting Combine the last couple of years, some of these questions have come out. Some of them were not exactly “printing material,” unfortunately, but below are the top five from my personal research and contacts around the NFL.

Before we get there, I have request. If you have been asked some crazy interview questions in your day, please feel free to email them to the editor below, and your responses could be included in a future article or eNewsletter. Now, onto the questions.

“If we come to town, will your girlfriend be there for dinner?”

Now, I’m not sure how many of you have been asked about family/significant others in an interview before—but this one sure was surprising for now Jacksonville Jaguars quarterback, Blake Bortles. Back in 2014, he was reportedly asked this question a number of times by various teams—both who knew he was dating a very attractive young lady, and teams who did not know he had a girlfriend.

For job seekers, if you are faced a question of this nature—we wish you the best of luck, kidding. In all seriousness, it would be best to respectfully say your significant other will likely not be attending any pre-employment meetings.

“How many different things can you think of that you can do with a paper clip?”

Courtesy of the Cleveland Browns during the 2014 NFL Draft as well, this question earned half of an article to be written about it on NFL.com. I guess this is way to get you to think outside of the box, but as mentioned before by McCourty of the Patriots, it is all about the reaction to the question. I wish we had the responses to this question, but I can think of around 10 uses for a paper clip off the top of my head.

“What animal would you describe yourself as?”

Thanks to former Alabama wide receiver, Kevin Norwood, for this one. He responded with some traits of the animal he chose (snake, python) to show his creativity regarding his response. What this goes to show is that you can use a question like this to show traits that you have which reflect the animal. So take the chance to think of an animal with good traits, and work that into what type of person and worker you are.

“If you were a kitchen appliance, which would you be and why?”

This question made me laugh when an NFL agent friend of mine texted it back to me—because I have been asked this one on an interview before when I was 18 years-old. My response then was, the refrigerator.

Why the good ole fridge, you ask? It is simple—dependability and versatility. The fridge is your go-to appliance in the kitchen. You trust it to keep items safe and from going bad, you go to it multiple times over the course of the day and it can hold a wide variety of different foods in it. Basically, the fridge is the super utility of the kitchen—and that fit me.

“If you could pick one superpower, what would it be?”

This is another question I have been asked before, so it was not surprising that the aforementioned McCourty said he had been asked it. In the world of sports, one would imagine being a speedster like The Flash would be the main answer, but superhuman strength would probably be a good one too.

At the end of the day, we have all been asked some pretty crazy questions in interviews throughout our lives. The important takeaway from reading some of the ones above is you need to be prepared for anything that is asked in an interview. If you go into an interview expecting to only be asked about your past job history and salary demands, you could be setting yourself up for failure.

Instead, focus on making yourself stand out in the interview process—because in this day and age of employers getting hundreds of applications via the internet, being selected for an interview is a big deal. If this means you need to be a Cheetah, an oven and a weird combination of The Flash and Superman because of your speed of getting tasks done, ability to see something through until the end and need to save people—so be it.