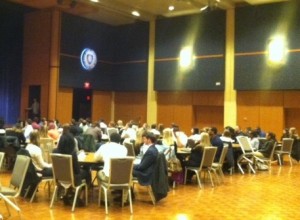 Over 80 student-athletes participated in the career fair and “speed networking” event in the ballroom at The KSU Student Center. Not only did the event afford NexGoal the opportunity to reach future athlete-candidates, but it also presented the chance to educate them on some of the basics of the job search .

“It was a great experience being able to sit down with so many collegiate athletes and talk to them about their future, and how we can help them best prepare for life after athletics,” said Wilhelm. “It was refreshing to see how many young men and women were focused on life after sports, and on becoming successful professionals.”

“Kent State’s Student-Athlete Academic Services did a great job putting this event,” added Berardinelli.  “Being a student-athlete in college is a full time job, and it is hard enough to juggle school and a sport at this level, so giving these individuals a night to start thinking about the next step in their life is important.  Many of the student-athletes were thankful to have the opportunity to put everything aside and start thinking about this next step in their life.”

NexGoal prides itself on its “athletes helping athletes” approach, and how we as former athletes who have made the transition from competition to becoming working professionals. “During the speed networking portion of the evening, Angela and I had the opportunity to educate the athletes about what sets them apart from other job seekers,” expressed Wilhelm.  “That biodata – their drive, ambition, character – all those traits that make them successful in their sport will help them be successful in their post-athletic careers and makes them attractive to potential employers.”

“It was great for us to come and talk about NexGoal as well because we relate with these individuals, and we were able to meet athletes from multiple sports and career aspirations,” said Berardinelli. “We had the opportunity to educate the individuals in regards to how to prepare themselves to land a great career once they graduate.  It was also close to home for me personally because it was not all that long ago that I was one of those student-athletes sitting on the other side of the table!”

NexGoal works with athlete-candidates to prepare them for post-athletic career by  offering assistance in several areas as well as offering a free upload of their resumes to our database for future consideration.