Is Your Company’s Management Style Impacting Hiring and Retention?

by Bob Evans in For Employers

Times are changing in the employment world—not to be confused with Bob Dylan’s hit from back in 1964. As more and more Millennials not only filter into organizations, but are being promoted and taking prominent roles, companies are finding themselves in a peculiar situation.

Gone are the days of conforming to the “old way” of work flow and structure. As CareerBuilder recently detailed in a post titled “7 Surefire Employee Morale Killers,” tactics like: Threatening jobs, Micromanaging, Holding employees back and much more are not only killing employee morale in the workplace, but they also do not hold the weight they once did when it comes to the manager “getting their way.”

When I was a kid, I always remember family members complaining about work and how their bosses treated them. When I asked why they put up with it, the simple response was always the same, “I need to keep food on the table.”

In 2016, that same threat will only work to an extent. CareerBuilder put it best in the aforementioned article, “Threatening your employees’ jobs in order to motivate them will almost always have the opposite effect. Rather than feeling driven to perform well, they will be distracted by feelings of fear, anxiety or resentfulness for being made to feel disposable. Not only will this take a toll on morale, it will hurt productivity and lessen the quality of their work.”

As time goes on, the line between enforcing old company rules and adapting to change in order to attract and retain top talent are crossing over more and more. This is not saying you need to change everything to suit your employees and throw all of your own policies and values out the door, but there are three areas you should consider making changes to if you want to stand out as an “employer to work for” in 2017.

One of the most common reported issues with employers today is the enforcement of the strict “9 to 5” work schedule. Work-life balance has been at the forefront of many employment conversations over the years, in fact, in an article written on INC.com late last year—an intriguing trend is emerging.

“According to the U.S. Bureau of Labor Statistics, more than 20 million Americans actively choose part-time work. They’re not working fewer hours because they can’t find a full-time position; rather, they’re engaging in a deliberate, careful work-life balance. For most, working part-time is a result of simply not being able to commit to 9-to-5 jobs.”

Offering the ability to work from home on a regular schedule helps productivity.

The article continued, “When coming to work is about more than showing up, things get done. As an employer, one great way to offer flexibility is to allow your employees to work remotely when you don’t need them at the office, or to work nontraditional hours. When the employer’s focus is on the work being done, the employees can focus on meeting deadlines and producing good work – not on watching the clock tick the seconds until it’s time to go home.”

A good example is a previous employer that allowed employees to flex their hours even if they were salaried employees. Most companies would just say, “Hey, you worked longer today that is on you.” Instead, this company made it a point to tell employees they appreciated their efforts to meet a deadline or to stay later one night by saying, “Report to your manager how many hours you worked late today, or if you took a shorter lunch, and find a good day to flex those hours.”

Working in data analytics and content analysis, the first week of the month was always filled with early mornings and late nights to get all of the metrics ready for the company to evaluate and the sales teams to sell with. This also meant my 8:30-4:30 hours turned into 8-6:30 or 7 p.m. on most nights. It would not be out of the question to look down at the time sheet at the end of the week and see a big old +10-20 hours next to my name.

Instead of burning myself out, my bosses would allow me to flex that time (start a little later, leave a little earlier) the rest of the month because it helped avoid burn out.

USA Today conducted a study last year which yielded results all employers should know. According to the study, “While the majority, 56%, of full-time employees are “extremely” or “very” happy with their current job, that number jumps to 67% among those who have access to free food, the survey of more than 1,000 full-time office workers found. Though just 16% of employees said they get free snacks and treats at work.”

When it comes to Millennials, they are a leader in the “food at work” movement. The presence of food in the workplace is actually a selling point for recruiting top-tier talent to your work place, according to the article. “Snacks may even lure employees to new companies: 48% of respondents said that if they were looking for a new job, they would weigh company perks, including availability of snacks, in their decision.”

Tech companies have long been known as the leaders in this movement, but they are not the only ones. The article noted that companies like “…Ann Taylor, Tesla and Visa,” are making major investments in food for employees. These companies have teamed up with NatureBox, a company that provides a snack subscription service. 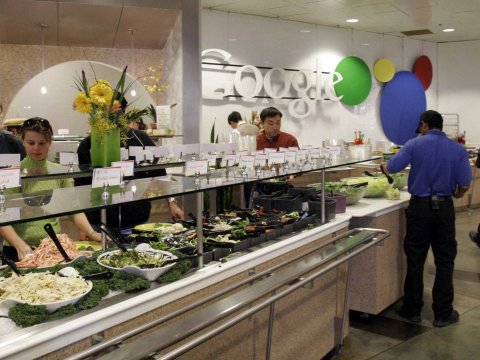 Google is well known for offering free food offerings to their employees.

So, does the mean you need to start offering a full kitchen? Absolutely not—companies like Google are on a completely different level offering around the clock meals and free food for their employees.

What it does mean is that your company should consider becoming more progressive when it comes to food in the workplace, offer snacks to your employees—or at the very least allow them to bring their own snacks to munch on while doing their job. If an employee is spending time worrying about being hungry, they are likely spending less time worrying about doing their job while on the clock.

If you work in the sales world, commission and bonuses are a regular part of your vocabulary. You get the base salary for doing the “grunt work,” and then the reward comes when that contract is signed, sealed and delivered and your commission and bonus checks arrive the following month.

But what are you offering the rest of your employees who are executing the plans sold by the sales team?

This was something commonly stated by the digital and web team I worked on at a previous employer. The sales team would go out and land major advertising deals (which often included a lot of incentives) that the digital team would have to devote a lot of extra time to deliver. At the end of the month, the long hours put in to deliver these orders only did one thing for the digital team—overwork them.

As time went on and the sales team would see major bonuses and commissions, it was difficult to keep morale up on a digital team that was now tasked with finding ways to grow traffic more than they were expected to meet demand—with no incentive other than keeping their job. Something as simple as a small bonus structure for ensuring the sales team’s major oversell would have gone a long way—instead, over 50 percent of that team ended up moving on from the company.

What does this mean for your company? Find a way to allow all employees to share in the success. Continuing to receive a paycheck only goes so far, you need to show employees their efforts in executing and delivering are just as important as the efforts of those who are selling and getting those bonus checks.

Obviously money is known as the major motivator, but other rewards like giving them a half day on a Friday, free lunch and more could go a long way. I was not even in management at that old company, however, every time I went out and got pizza, cheezy bread and chicken dippers to share with the team as a surprise lunch after we crushed out a major digital deliverable, there was a noticeable uptick in team morale. Sometimes, it is the little things that keep employees happy, and could go a long way in helping you retain and attract top talent to your company.