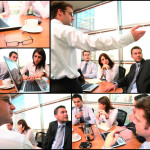 A survey of 821 female senior managers and executives at companies with annual revenues over $250 million found that 55% of women in those roles played sports at the university level.

The survey, part of Ernst & Young’s sponsorship of the 2016 Rio Summer Olympic games also found that almost 75% of those female leaders said people who have engaged at sports at some level work more effectively in teams than those who haven’t engaged.

“Not only do the majority of senior women executives have sports in their background, they recognize that the behaviors and techniques learned through sports are critical to motivating teams and improving performance in a corporate environment,” said Beth Brooke, global vice chair of public policy for Ernst & Young. She added the report “validates and underscores the fundamental role that participation in sports plays in developing women leaders.”

Ernst & Young’s Women Athletes Global Leadership Network aims to connect female athletes who seek a meaningful career outside of their sport with retired elite athletes, including women Olympians, who successfully transitioned to an impactful second career. They also will connect these athletes with the company’s business network of top female leaders and entrepreneurs around the world, many of whom have sports in their background.

The study – the first in a series looking at the connection between women’s advancement in sports and business success – also found: