If the last 48 hours in the NBA have taught us anything, it is that there are a number of topics you just should not talk about with your co-workers—just ask Los Angeles Lakers guard, Nick Young. For those of you who are not up to speed on drama from the NBA world that is trending on social media, we will give you the cliff notes version.

Young was hanging out with rookie D’Angelo Russell around two weeks ago, and it seems the two were talking about Young’s personal life off the court involving women. While this was going on, Russell apparently was taking a video of some sort (Vine or Snapchat), which disclosed Young’s recent interactions with a 19-year old woman.

So what is the problem, you ask? Well, Young is engaged to celebrity singer/rapper, Iggy Azalea—and somehow Russell’s video got out and went viral, essentially exposing to Azalea and millions of other people in the world what Young had been doing behind her back.

Now, if you want to read more about the story you can easily find it by heading to social media, because it is all over the place. What is important for the team here at NexGoal is that this situation brought up something we have not written or talked about in a while—workplace conversations.

As time goes on at our jobs, many of us become more and more comfortable with the people we are around on a day to day basis. Naturally, this means we will talk about different aspects of our lives—it is only human nature. When you spend 40-plus hours with the same people—which may be more awake time than you spend with your own friends and family—you are likely to open up to them.

However, as is the case with Young and Russell, sometimes there are topics and conversations better left out when it comes to your co-workers—no matter how close of friends you have become. Luckily for you, the team here at NexGoal has put together a list for our usual “Three for Thursday” article that you should avoid if possible in the workplace.

Let’s start with the elephant in the Los Angeles Lakers locker room right now and the lesson you can learn from it. Did Russell probably break “team code” by taking a video of his teammate talking about his personal life? Absolutely, anyone who played (plays) sports has received the same lecture from day one—“What happens in the locker room, stays in the locker room.”

Being a 20-year old rookie, Russell will suffer teammate consequences as a result of this. However, it could have all been avoided by simply adhering to the No. 1 thing to not talk about with your co-workers. There is simply nothing good that can come from it.

If you are single and your co-workers are married, you are likely going to draw certain labels based on your outside of work personal relationships. Based on those habits, your co-workers will draw conclusions about you as a person that likely have very little to do with your ability to perform your job function and be depended on in the workplace.

Think about it for a second, we all know how people act. If you are dating around and talking about it at work, you could be viewed as someone who is afraid of commitment and not trustworthy by your co-workers. While that is likely not the case at all, you opened yourself up to criticism and scrutiny by opening that window into your personal life.

Listen, we all get the questions from our co-workers about our personal lives. But it is much easier to answer with, “I’m seeing someone” or “I’m just focused on work right now” than to open that door for follow-up questions. Keep your personal life out of the workplace.

This one should be the easiest to avoid for people but it is never avoided—because it is commonplace in our daily news-cycle. To stress how important it is to avoid politics in the workplace, let me tell you a little story.

At a previous place of employment, two of my co-workers LOVED to talk politics. When I say love, I mean it—car rides to lunch, during lunch, back at their desks and any place they could have the conversation, they would. Now, I want to stress there is nothing wrong with enjoying politics—but you have to think about what is happening when you are having this conversation.

First, the people around you who do not know anything about politics are likely clueless about what you are talking about and feeling pretty bad about themselves. Second, those around you who do know politics and choose not to talk about it at the workplace are getting annoyed because you will not shut up about it. Third, and the most important of all, if you are having a heated disagreement about your point of views when it comes to politics, people might think you are about to have a fight in the workplace—seriously. 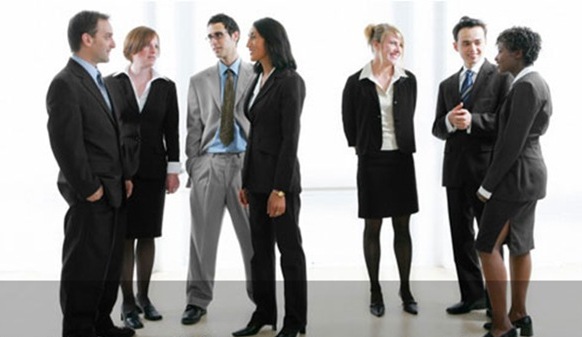 Avoid these 3 conversations at all costs.

For whatever reason, when people who have opposing views discuss politics their faces turn red and voices get louder and louder as the conversation goes on. Passion comes out when we all believe in things—unfortunately that passion often looks like you are about to come to fisticuffs right in the middle of the office.

Just say no when it comes to talking politics in the office, save it for your Twitter and Reddit rants.

This will be a tough habit for most to break, because we are all guilty of it. I mean, who better to understand the trials and tribulations you go through in the office than those who are experiencing it with you, right?

Unfortunately those you work with are the worst to talk about work problems with—which is a lesson I learned all too well at a previous employer. I thought it would be okay to ask a question about something that was making me unhappy to a longer-tenured employee of the company to see if it had always been like this. Boy, was I wrong—it opened up a major can of worms that should have never been opened.

First, this person began to tell me about all the negative things about the company over their 10-plus years there. Then it turned into a “you should get out while you are still new” conversation. Finally, somehow this person then turned my question into a workplace epidemic of sorts, which reached the management level and came back on me.

Moral of the story, if you are unhappy with something at work just go to Human Resources or your direct report manager. Your words will get twisted, others could become unhappy based on what you said and ultimately the backlash just is not worth it.